Some of my first hand tools were planes, block and bench planes and all were made of metal. Many of the garage and estate sales I frequented had wooden planes and either my wife or I purchased a couple. After joining the Unplugged Woodworkers group on Facebook and seeing the plethora of wooden wonders other people were using I decided to up my game.

I am fairly well versed in metal plane restoration, from both the more minimalist preservation method to the full-blown, ground up, make the plane like new technique. Once I started using wooden planes, AKA "woodies", I realized my metal plane process wasn't going to work so I started looking around and asking what others do. My approach here is absolutely a more minimalist one, the goal is to clean off things like dirt, paint, glue, oil, tar and all of the other types of gunk an old woodie has gathered over a century while maintaining as much of the patina as possible.

There are many commercial cleaning products around but I wanted something a bit more natural and far less caustic than the options at the store. After much research, debate and testing I came up with two basic recipes for cleaning up woodies. But, before diving into details, a couple quick notes. I am not going to dig into the complete plane restoration process, that's for another article, the purpose here is to present options for cleaning the wood itself. It should also be noted that these recipes and techniques can be used for cleaning nearly any old wood, furniture, etc, not just hand planes.


The first recipe came from a gentleman, Bob Page, and consists of equal parts Boiled Linseed Oil (BLO), Pure Pine Turpentine (PPT) and Apple Cider Vinegar (ACV). After searching the 'Net for this mix I discovered similar recipes here and here. The former link is dated 1988 and calls it his "magic formula". Bob had mentioned that he learned it from someone else and that it is a very old recipe for cleaning furniture, this small finding seems to back that up. From here on out I'm going to call this one "Bob's Magic Formula" which pays homage to the original recipe and gives kudos to Bob for introducing me to it. And since I'm in IT and LOVE acronyms, it's BMF.

The second recipe came from another gentleman, Jim Hendricks, in England and consists of equal parts Raw Linseed Oil (RLO) and Pure Pine Turpentine (PPT). His recommendation was to mix that up and use a cotton rag wrapped around cotton balls to wipe the tool with. Well, there were many other instructions provided so I've translated his supply list from English English to American English. :-) We're going to call this one "Jim's Woodie Cleaner", or JWC.

I tested both recipes and modified them a bit to what I think works the "best", here are the results.

Here's the mark for testing this mix: a Stanley no 31 transitional plane that has most of the gunk elements I mentioned earlier: dirt, oil, tar and some paint. It was very, very dirty when I started out as you can see in the picture to the left. Mix equal parts of BLO, PPT and ACV in a quart
canning jar (or similar) and shake vigorously. To the right is an image of what it will look like after mixing. The ingredients separate quickly so you will need to shake the jar periodically as you use it. I started the cleaning process using just a cloth rag but that didn't take off enough of the dirt as I wanted. Yes, the goal was minimalist, but at the same time I wanted to remove enough of the grime that it actually looked cleaner. I switched to 0000 steel wool and ultimately found a 3M Scotch-Brite pad to be the ideal cleaning tool. 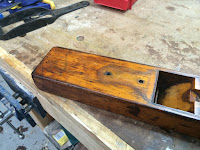 For the stubborn dug in dirt and grime like this one had, don't be afraid to scrub, just pay attention to leave as much of the patina as you'd like for the tool at hand. After cleaning for a bit use another cotton rag to clean the liquid and dirt off the tool. Alternate between scrubbing and cleaning until you've reached the state you want. Continue until you think you're done at which point give the tool one final wipe with a dry cotton rag then coat the whole thing in BLO and let that soak in. The wood on the old tools is usually dry, sometimes extremely, and will soak up the BLO. Keep applying BLO until the wood just won't soak in any more, many times this will take several days. This step is critically important for your tool to survive another 100 years, the BLO prevents additional shrinkage of the wood which is the leading cause of cracking and ultimately breaking and failure. Once that's done wipe on a coat of wax, I prefer Renaissance Wax but any other paste wax should work as well.

And the final result of this method:


Overall the recipe extremely well as you can see, the one con is that you won't be able to do the work in batches due to the boiled linseed oil drying. Once the BLO in the mix has dried any remaining dirt will be trapped underneath it. So, if you do a bunch of cleaning and let it sit overnight to come back to it, you're done. 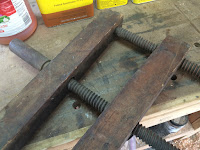 This recipe starts out with equal parts of RLO and PPT mixed the same way as the previous one in a canning jar. Why the raw linseed oil instead of boiled? Well, remember the primary con I mentioned above in that the BLO dries and essentially gives you one shot at cleaning? Raw removes that limitation, it takes significantly longer to dry (if ever).

For this test I used a really old clamp from a garage sale, I didn't have another wooden plane handy so this will have to work as a stand in. As you can see in the image to the right, this particular clamp was fairly filthy, it had to be at least 50 years worth of dirt on it. Add to that some cracks and non-functioning screws. 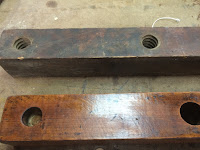 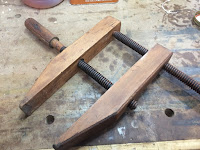 I used the 3M Scotch-Brite pad as before and went to town on it, in order to get most of the grime off I had to scrub pretty good and constantly shift between a wipe-down rag and the scrubbing pad. This one took long enough that I had to make another batch of the mix to continue. So, when I did that I decided to experiment and basically take the previous recipe of BLO-PPT-ACV and turn this into RLO-PPT-ACV, or a hybrid of the two. This made a quite noticeable difference in the quality of the cleaning the mix did, I would say it was twice as effective. I continued cleaning until I reached the state in the picture on the right at which point I started the final BLO soak/wipe process for what turned out to be all day Sunday. Last thing was a coat or Renaissance wax, final results below.


The only real con to this recipe, either in the original or modified mix is the fact that it uses raw linseed oil. This proved difficult for me to source locally, I eventually ended up buying it from Amazon. Overall I ended up preferring the modified JWC mix of equal parts RLO-PPT-ACV, it cleaned the fastest and provided the best final result. Not only that it allows you to work in stages on really dirty items, do some and come back later. That alone puts it over the edge as the winner in my mind.

Now that it's a hybrid of the two recipes I need a new name for it, at the moment it's "Woodie Cleaner #3", suggestions welcome.

And a special callout to the Unplugged Woodworkers members that provided assistance in this endeavor, I hope that I captured all that I learned from you here so others can benefit from it.